In order to get access to the reports, please log in to the site using one of the following authentication providers:

By logging in to our site you agree to our terms and conditions.

Time of the first goal for green-up strategies

You want to know the time it takes to score the first goal to be able to bet in Over/Under markets, Match Odds markets, and Correct Score market.

Use this report to also predict your P/L in a simple green-up strategy where you lay on the Draw or Over/Under 0.5 at the beginning of the match (at 0.5 minutes after the kick-off) and then green up at the chosen minute.

Average price (based on all qualifying matches) of The Draw (back price) and Over 0.5 goals (lay price) immediately before the kickoff. The two selections are chosen for your convenience, you can decide which one to use in your strategy. This value will not change as you click on various minute bars.

Average price (based on all qualifying matches with at least one goal) of The Draw (lay price) and Over 0.5 goals (back price) at 30 seconds before the first goal. This value will not change as you click on various minute bars.

Click on country bars to include/eliminate football games from that country.

Click on league bars to include/eliminate football games from that league.

The height of each bar corresponds to the percentage of matches where the teams scored the first goal at that minute (±5 minutes).

The first bar standing at <0 minutes reflects the number of matches where no goals were scored.

Click on bars (except the one at <0 minutes) to see how much you would earn or lose if you placed a bet on one of the featured selections and then greened up at the chosen minute.

Note: in some cases it will be impossible to green up your bet, for example, if no goals were scored in a match.

The minute of the match is calculated approximately based on the expectation of 3 extra minutes in the first half. Extra time is aggregated as 45'+ and 90'+.

Amount of money you will win or lose if you lay £1 on The Draw in Match Odds at 30 seconds after the kickoff, then attempt to green it up by backing at the chosen minute.

Amount of money you will win or lose if you lay £1 on Over 0.5 in Over/Under 0.5 goals at 30 seconds after the kickoff, then attempt to green it up by backing at the chosen minute.

Markets with less than £500 matched before the off are excluded from the report.

Calculations of average prices and P/L is conducted only in the markets where at least £1,000 was matched at kickoff.

If it is impossible to green up a bet in a particular match at that minute and the teams never score, the lay bet will be considered lost.

If the first goal was scored after the chosen minute, your lay bet will be considered won.

The exchange commission used in the calculations is 5%. 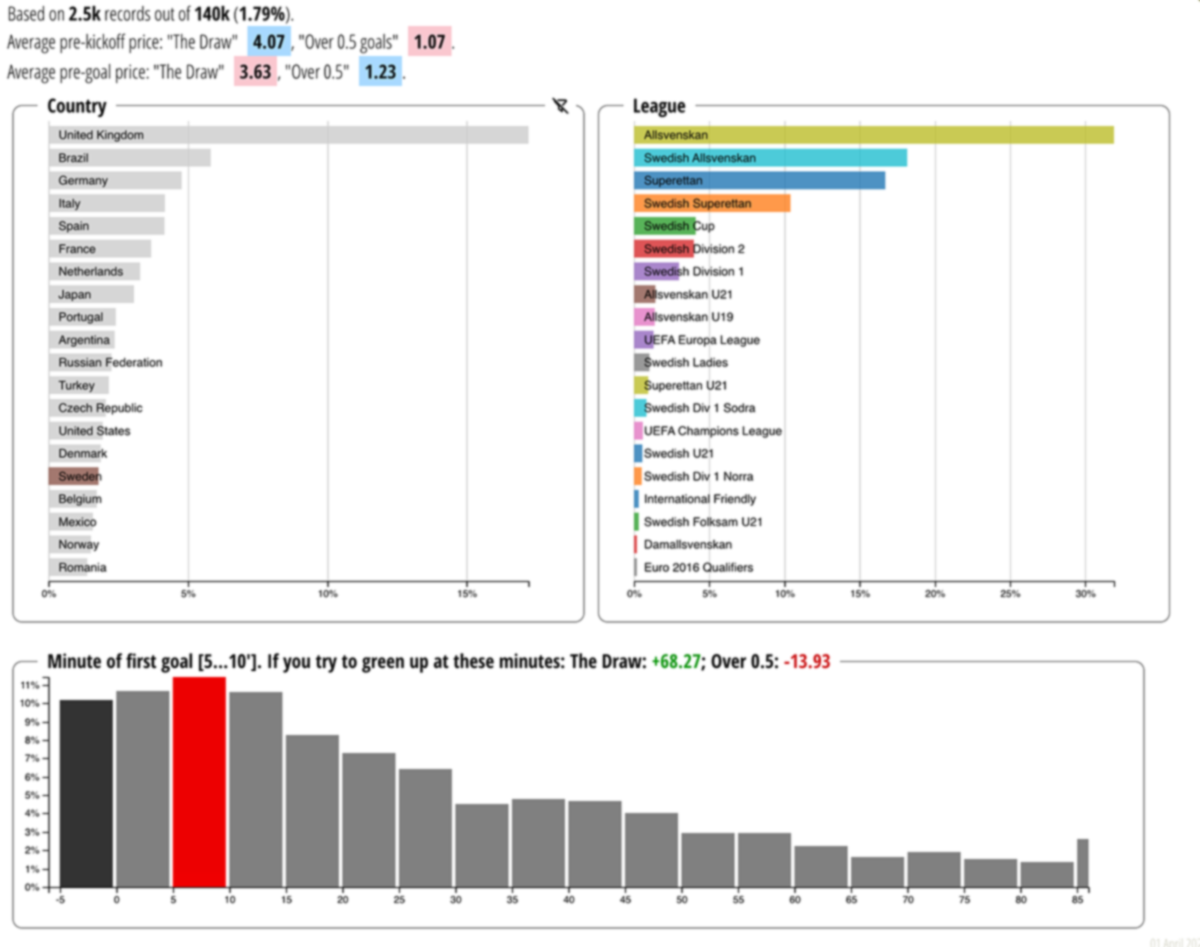 The page you requested is not found.